Posted on September 21, 2012 by South Tipperary

Our first event took place in Hearn’s Hotel Clonmel in which the committee has been given the use of the venue for our meetings and training sessions and we at the group would love to thank Fergal Jamie and all the staff for the support they have shown us over the last number of months.

The speakers were from all over and our first speaker was Kevin Kelly is the chairman and founder of the LGBT South east parents group. Kevin spoke of the work that the group does and has given us the views of living as a parent who is belong to the LGBT community and this was well spoken about in his delivery that he gave.

Our second speaker of the night was the current Mr. Gay Tipperary, David Fallon who gave a wonderful insight into his life as growing up gay and how it affected him and the way people treated him and how it made him stronger and to go on and take part in the Mr. Gay Ireland heat that he won.  He spoke of the future of himself and the group of LGBT South Tipperary

The third speaker was Poul Walsh Olsen from LGBT Diversity the midlands regional officer. South Tipperary is part of the area he covers. Poul spoke highly of the work that we’ve done and continue to do. He was delighted to have been invited and thanked us all. 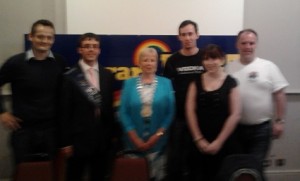 Finally our guest of honor was the deputy mayor of Clonmel Cllr. Theresa Ryan who spoke highly of the group and has said that she was delighted to have been invited and has offered to help the group if possible.

As chairperson Thomas Ryan ended the seminar by thanking people and all those who helped to make our first awareness night a success.

Please stay tuned to our facebook page for more updates on the next leg of the campaign and to watch out for the wonderful leaflets that has been made and will be sent around South Tipperary really soon.