Ok u lovely people, Ive decided there will b no invites to my wedding instead u are all invited 😀 And also I dont want gifts instead I would rather everyone contribute €20 at the door which will go to charity instead.. And so u guys dont feel left out of the celebrations because it’s close to halloween its a fancy dress wedding :)..Now u dont have to wear fancy dress but it will be good craic and make the night more fun and I wont feel like such a plank hahaha and I will even give a prize to the best dress… 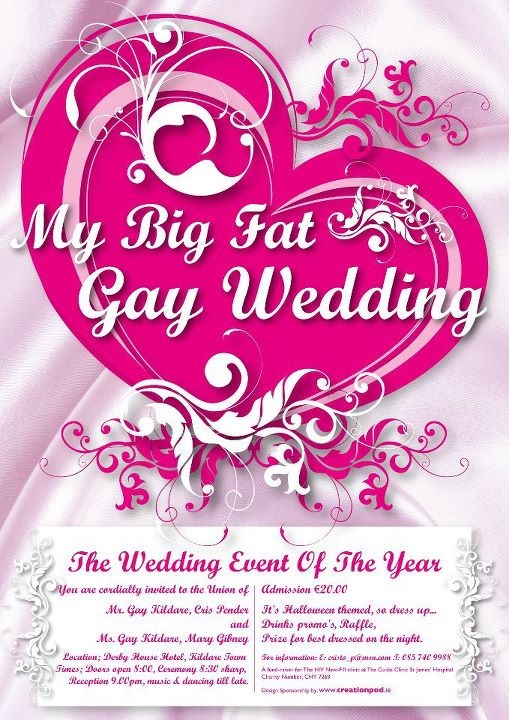 IT’S THE WEDDING EVENT OF THE YEAR

You are cordially invited to the Union of

It’s Halloween Themed, so feel free to dress up…

food, drinks promo’s, Raffle and a prize for best dressed on the night

for more information or if you a business and feel you have something to contribute:

Cris Pender is an active member of the LGBT community, through his work as both Founding member and Chairperson of Sunrise LGBT Kildare and Chairperson of K.L.G.B.T. Cris has managed with the assistance of the group to create a visable LGBT community in Co. Kildare. http://facebook.com/sunrise.lgbt.kildare Phone/ text: 085 740 9988 Mr Gay Kildare 2011 http://www.facebook.com/pages/Mr-Gay-Kildare-2011-Cris-Pender/230336760314311
View all posts by Sunrise LGBT Kildare →
This entry was posted in Events, Kildare, mma kildare, Mr Gay Ireland and tagged 22nd of October, Cris Pender, Derby House hotel, Kildare town, My big fat wedding • Mr Gay Kildare. Bookmark the permalink.