Approximately 45 people from different areas of the south east were present at the launch of the Regional Strategy for Building Strong and Inclusive Communities in the area at Dooley’s Hotel Waterford on 24th October 2012. Key speakers included Bernie Smith, developmental worker in the south east, Catherine Power of Waterford Area Partnership, George Robotham of LGBT Diversity Steering Committee, Niall Crowley of the Equality Authority, and Chris Pender spokesman for the Southeast Regional Strategy Group. 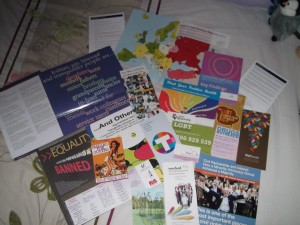 While it is acknowledged that much work has been done in developing LGBT supports in the region in recent years, there is still much to do as social exclusion and discrimination are still prevalent, particularly in rural areas. Having said that, the southeast can now be considered a role model for another areas, considering recent achievements there.

Following the speeches, individual groups were formed to discuss particular themes, namely education and training, equality and diversity, health and safety and transgender issues. From each of these themes, a number of strategies were put forward, which could be either implemented under current work plans, or may form the basis of future action plans.