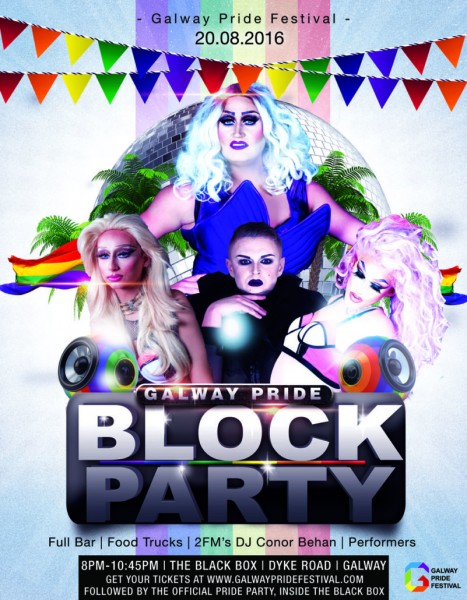 All early bird tickets will finish on August 7th so get in early and save up to €15 on the weekend!

Exerpt from the Connacht Tribune Article :

The parade will be led by grandmarshal James Patrice, Ireland’s top snapchatter who has presenting gigs on TV3’s Ireland AM and Xposé, finishing up in the Spanish Arch, where there will be a family fun event for three hours, with music and food.

On the Friday, there will be a comedy night at the Loft in Seven on Bridge Street with comedians Pat McDonnell from Father Ted, while Katherine Lynch with host Martin Beanz Warde.

The traditional Corrib Princess cruise and party on the Sunday evening kicks off with drinks at Nova Bar before revellers are transported by open top bus to Woodquay.

The more serious side of the festival take place at the beginning of the week with workshops on mental health, one centred on the transsexual community, another geared to parents of gay children with a talk by Paul Hegarty of the West Sligo Family Resource Centre who almost lost his daughter to suicide after she came out.

A third workshop is dedicated to HIV – last year there was a 30% increase in the numbers of people diagnosed with the virus, with one person each week diagnosed in University Hospital Galway alone.

This will be hosted by Robbie Lawlor, a former Mr Gay Ireland who lives with HIV and now works as an advocate for the Lesbian, Gay Bisexual and Transgender community.

Thursday is an alcohol-free day of events geared to tee-totallers and those who feel disenfranchised by the festival’s alcohol-fuelled partying.