Ireland’s first ever official Gaydar Radio Tour gets underway this coming weekend, and it’s gonna be hot! GaydarRadio, the world’s largest gay radio station reaches half a million listeners each week, with an estimated 40,000 tuning in from Ireland every month.

And now, Gaydarradio is coming to Ireland on the August Bank Holiday weekend to deliver four nights of absolute clubbing bliss, with official GaydarRadio DJ’s spinning your favourate chart dance anthems both classic and current, across some of the countries top gay venues.

The Official GaydarRadio Irish tour is brought to you by Wexford’s _
Get Busy Promotions.

Many Thanks
Paul Cullen 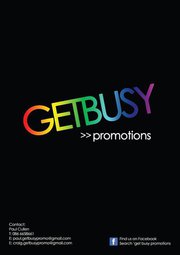