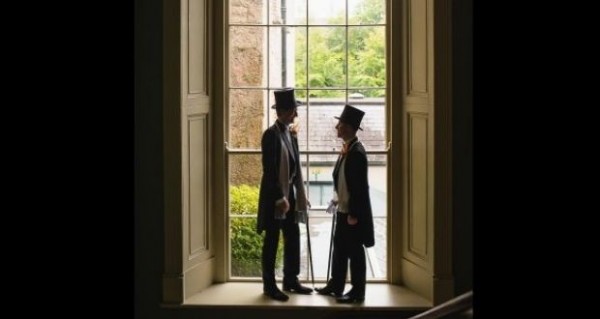 Link to the historic part of the Ceremony & interview http://bcove.me/5v068oz9

When Richard Dowling and Cormac Gollogly tie the knot this morning it may seem somewhat familiar. They were already joined in a civil partnership on September 18th but will now make a little bit of history by becoming one of the first if not the first same sex marriage registered in Ireland.

Irish officialdom began recognising same sex marriage on Monday, following passage of the Marriage Act 2015. It was only then that the registration procedures for Tuesday’s ceremony could be finalised, said senior registrar for south Tipperary Mary-Claire Heffernan.

She as wedding solemniser will preside and the happy couple are scheduled to revoke their civil partnership and enter into full matrimony at 8.30 am in Clonmel.

“This really brings to fruition what we wanted to happen on September 18th, so this is the icing on the cake,” said Mr Gollogly, a Dublin-based barrister.

They already enjoyed an elaborate civil ceremony and reception complete with top hats and tails, surprise fireworks and a honeymoon in the Maldives.

In contrast, this morning will be a short and low-key event – despite its historic nature. No family is involved and two women working in the office will serve as witnesses.

“We didn’t want to detract from the main ceremony and debated what to do,” said Mr Gollogly. “We decided to keep it simple and decided to have lunch with the families in Dublin.”

Even so, they were keen to become the first same sex marriage on the books. “They have been planning this for the last two weeks and waiting to see when we could do it,” said Ms Heffernan.

Anyone registering for marriage must wait three months before a ceremony could be held, but this does not apply if there is an existing civil partnership. You register intent but can then be married the next day, she said.

Other couples may also be attempting to grab a place in the record books, hence the early start this morning.

“They kind of want to be the first so they have to do it as early as possible to get it registered and on to the system as the first same sex couple,” said Ms Heffernan.

“We are aiming to be the first in the country,” said Mr Gollogly. “We are very excited. We feel very honoured and grateful to Mary-Claire who will be there in the morning with us.” She also officiated at their ceremony in September.

Mr Dowling, who is in banking, was also very happy about winning the right to full marriage for same sex couples.

“We are really delighted to be able to do it and we are 12 years together so it was obviously the next move,” he said. “Having a full marriage was important to us so now we can relax and get old together.”

They had been hoping to hold out and have a full marriage first as last but given the risk of legislative delays they set the date for September. The legislation cleared quickly however, forcing them into the double ceremony.

The Irish Mail: First ever same-sex marriages take place in Ireland but there’s heartache for one couple

the Journal: Check out this incredible image from one of Ireland’s first same-sex marriages

Follow
This entry was posted in Covers, History, South Tipperary. Bookmark the permalink.