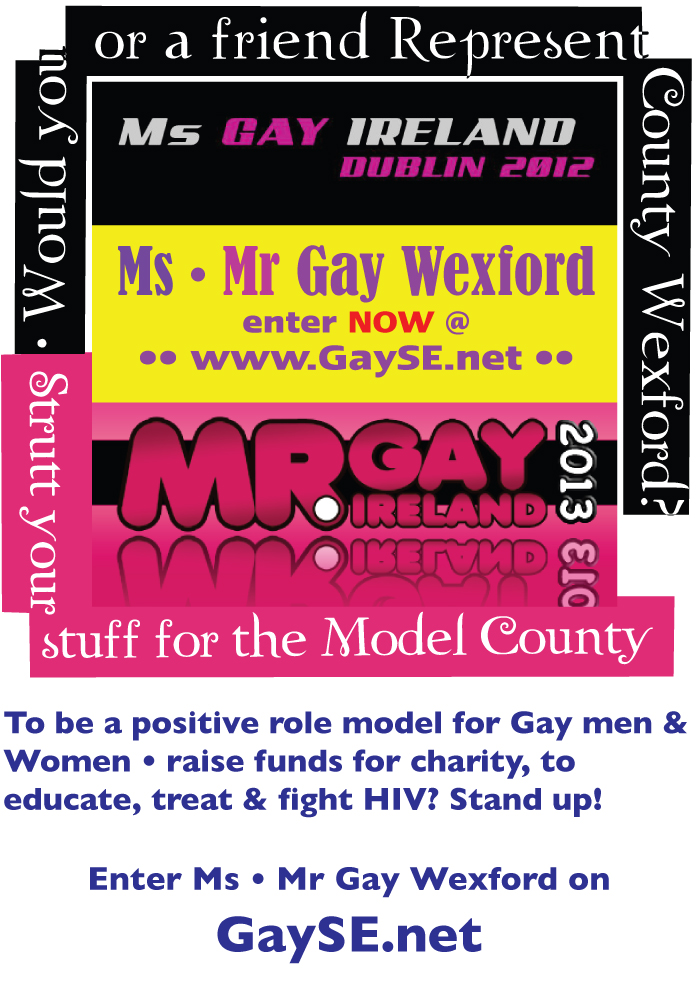 Mr Gay Ireland is an All Island project to promote the self esteem of young gay men and to support HIV/Aids. Mr Gay Ireland • MrGayIreland.com

ENTER before the 29th of August •• Coronation event in September.

Criteria to Enter
• Be from, work or live in Wexford County
• Be over 18

How do you enter?
Submit your nominations and photos via the form here or email life@gayse.net with Ms Gay Wexford •  Mr Gay Wexford* 2012/13 in the header bar. The earlier the better. A spot of talent scouting may take place too. We will conduct a video recorded interview with the nominee using the questions from the entry form forthe next stage of the competition. [The nominee & their team may submit a link to their own video of adocumentary (or mockumentary 🙂 ) based around the nomination questions.]

Videos will be available to view by our readers at GaySE.net. The ON-line public vote will occur over oneweek in August.

Criteria to Enter
• Be from, work or live in Wexford County
• Be over 18

Why would you enter?

Antony Curtis, Mr Gay Wexford on the Quay in Wexford

Ms Gay Wexford 2011 Valerie Doyle, aged 42 hailing from Duncormick represented County Wexford in Limerick at the Ms Gay Ireland 2011 held during the Limerick Gay Pride Festival. Valerie spoke out for professional carers,  expressed the importance of being themselves and requested that people be true to themselves.

Both Wexford representitives found the activities & events, excellent unique experience. Great fun was had by all.

The form below is a variation of the form that must be filled in by Mr Gay Wexford to attend Mr Gay Ireland and should be filled in-full by male competitors. The ladies are not required to be so thorough. Ms Gay Wexford does not need to fundraise but should be aware and able to speak of the charity she wishes to support should she win Ms Gay Ireland.

* This is not a ‘Gay Wexford’ group event & the title Mr Gay Wexford is a Trademark owned by the Mr Gay Ireland events.
**After expenses are covered.