Color has long played an important role in our community’s expression of pride. In Victorian England, for example, the color green was associated with homosexuality. The color purple (or, more accurately, lavender) became popularized as a symbol for pride in the late 1960s – a frequent post-Stonewall catchword for the gay community was “Purple Power”, of course, there’s the pink triangle. Although it was first used in Nazi Germany to identify gay males in concentration camps, the pink triangle only received widespread use as a gay pop icon in the early 1980s. But the most colorful of our symbols is the Rainbow Flag, and its rainbow of colors – red, orange, yellow, green, blue, and purple – represents the diversity of our community. 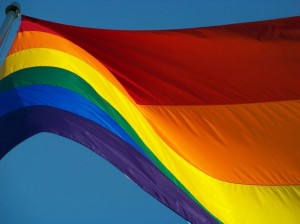 The first Rainbow Flag was designed in 1978 by Gilbert Baker, a San Francisco artist, who created the flag in response to a local activist’s call for the need of a community symbol. (This was before the pink triangle was popularly used as a symbol of pride.) Using the five-striped “Flag of the Race” as his inspiration, Baker designed a flag with eight stripes: pink, red, orange, yellow, green, blue, indigo, and violet. According to Baker, those colors represented, respectively: sexuality, life, healing, sun, nature, art, harmony, and spirit. Baker dyed and sewed the material for the first flag himself.

Baker soon approached San Francisco’s Paramount Flag Company about mass producing and selling his “gay flag”. Unfortunately, Baker had hand-dyed all the colors, and since the color “hot pink” was not commercially available, mass production of his eight-striped version became impossible. The flag was thus reduced to seven stripes.

In November 1978, San Francisco’s gay community was stunned when the city’s first openly gay supervisor, Harvey Milk, was assassinated, Wishing to demonstrate the gay community’s strength and solidarity in the aftermath of this tragedy, the 1979 Pride Parade Committee decided to use Baker’s flag. The committee eliminated the indigo stripe so they could divide the colors evenly along the parade route – three colors on one side of the street and three on the other. Soon the six colors were incorporated into a six-striped version that became popularized and that, today, is recognized by the International Congress of Flag Makers**.

The flag consisted of eight stripes; Baker assigned specific meaning to each of the colours:

“I love going to cities around the world and seeing the rainbow flag, knowing that it’s a safe place where I can be myself,” says Gilbert Baker the man who created the flag 30 years ago.

“In 1978, when I thought of creating a flag for the gay movement there was no other international symbol for us than the pink triangle, which the Nazis used to identify homosexuals in concentration camps. Even though the pink triangle was and still is a powerful symbol, it was very much forced upon us,” says Baker.

“I almost instantly thought of using the rainbow. To me, it was the only thing that could really express our diversity, beauty and our joy. I was astounded nobody had thought of making a rainbow flag before because it seemed like such an obvious symbol for us.”

Born and raised in Kansas, Baker was drafted into the US army at 19 and served as a nurse in Vietnam for two years. While in the army Baker fell in love with a fellow soldier, an experience he describes as the most transformative moment of his life. “When I fell in love, all the shame and guilt I carried with me for years suddenly vanished.”

After his tour in Vietnam, Baker moved to San Francisco, a vibrant and socially progressive city that was full of culture, and where individuality was celebrated rather than repressed – very much the opposite to his native Kansas.

Gender-bending glam rockers, hippies and beatniks were flocking to San Francisco at this time and for Gilbert it was the passion for fashion and a lack of cash that sparked his interest in sewing. To his own amusement he quickly became known as the “seam master” on the gay scene:

“I would be the guy they’d call up when they needed banners for demonstrations. That became my role in the gay movement and I am very proud to say that my craft was my activism, it still is.”

“The rainbow flag has become far more than just a flag, it gives people hope. When LGBT people across the world fly this flag they are saying something, they are taking action.”

Excerpts taken from an interview by Kristina Baker for the independant, Thursday, 19 June 2008

** a confusion of  the titles of two flag organisations •  International Association of Vexillological Associations, and the Flag Congress.