Being a teenager can be difficult. Being a teenager who’s gay, lesbian, bisexual or transgender can be even tougher. Sophie Kelly visits a newly-formed Carlow group supporting local teenagers. 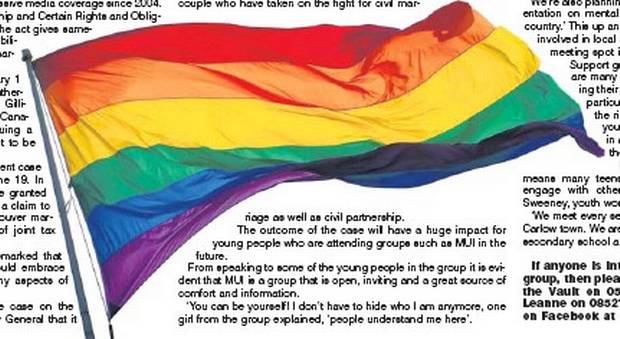 Being a teenager can be hard. It can be even harder when you are a teenager that is gay, lesbian, bisexual or transgender. Figuring out your sexual identity can be an extremely confusing and difficult time. Some know from an early age as to whether they are straight, gay, lesbian, bisexual or transgender while others may be confused as they grow into adults.

Coming out can be both a positive and stressful experience for anyone. It is not always easy and so reaching out to someone who you can trust and who will be supportive can be vital.

Telling your family and friends can be a daunting experience and so sometimes it can helpful to be around those who may be going through or have gone through something similar.

While some support groups are available across the country they are few and far between. In the last year, Carlow has seen a new group form which caters for teenagers.

MUI has been up and running since September 2011 and is supported by Belong To Ireland and The Community Foundation. Belong To is a national youth service for Lesbian, Gay, Bisexual and Transgendered (LGBT) young people, aged between 14 and 23 in Ireland.

They provide direct youth work services for LGBT young people in Dublin and support LGBT youth groups all around the country.

These are spaces where LGBT young people can meet each other, get involved in activities and see that their identities and selves are valuable and important.

Belong To also work to change the negative social attitudes towards LGBT by training teachers, youth workers and running campaigns in schools around the country. MUI strives to be a safe, friendly environment for anyone who is Lesbian, Gay, Bisexual and Transgender, and of secondary school age to meet up, take part in fun activities and share ideas.

The topic of the rights of gay and lesbian couples and civil partnerships in Ireland has gained massive media coverage since 2004.

Granted under the Civil Partnership and Certain Rights and Obligations of Cohabitants Act 2010. The act gives same-sex couples rights and responsibilities similar, but not equal to, civil marraige.

The act came into effect January 1 2011. Two weeks ago, Senator Katherine Zappone and Dr Ann Louise Gilligan, who were lawfully married in Canada, announced they will be issuing a fresh legal challenge in their fight to be married under Irish law.

The couple’s appeal in their current case had been due to take place June 19. In November 2004, the couple were granted leave by the High Court to pursue a claim to have their September 2003 Vancouver marriage recognised for the filing of joint tax returns in Ireland.

Mr. Justice Liam Mckechnie remarked that the case was significant and would embrace far-reaching issues touching many aspects of society.

The Government contested the case on the basis of advice from the Attorney General that it would prevail.

The case attracted wide coverage from international media such as The Boston Globe and the couple were interviewed on The Late Late Show. The judgment was delivered on December 14, 2006.

With Ms. Justice Dunne finding that although a ‘living document’, the Irish constitution had always meant for marriage to be between a man and a woman, that the definitions used in the Civil Registration Act of 2004 was an expression of the current attitudes of the state and that she could find no reason to change that.

She also found that the constitution did not violate the plaintiffs’ rights under European law. The judgment did say, however, that the topic is very much in the news and that there were undoubtedly difficulties and hardships for same-sex and unmarried heterosexual couples.

The couple were in the process of appealing this in the Supreme Court when news broke on June 6 that fresh proceedings will be issued in the High Court in order to challenge – among other issues – the constitutionality of the Civil Registration Act 2004 which marked the first time marriage was defined in Irish statute as being between a man and a woman and the Civil Partnership Act which prohibits people who have registered a civil partnership from marrying.

The Irish Constitution does not currently include a definition of marriage, but does include a commitment to equality for all citizens. LGBT organisations have come out in support of the couple who have taken on the fight for civil mar-

riage as well as civil partnership. The outcome of the case will have a huge impact for young people who are attending groups such as MUI in the future. From speaking to some of the young people in the group it is evident that MUI is a group that is open, inviting and a great source of comfort and information.

‘You can be yourself! I don’t have to hide who I am anymore, one girl from the group explained, ‘people understand me here’.

A young man said, ‘I’ve never felt so comfortable in a group. I feel like I can talk about anything without being judged, in a safe environment. I can be myself comfortably. The group is a great place where teenagers can go to learn new skills, make new friends and have fun.’

Since the establishment of MUI the group has covered a wide range of activities, such as team building, youth leadership training with ‘Belong To’, creating a Facebook Page and making a rainbow for the St. Patrick’s Day parade.

Another member commented, ‘Workshops such as mental health have been covered and we are planning to cover things such as ‘coming out’ and LGBT Sexual Health.’

We’re also planning to go to Waterford Pride Week to give a presentation on mental health to other LGBT groups all around the country.’ This up and coming new group are really enjoying getting involved in local and national initiatives and look forward to their meeting spot in the Vault Carlow every second week. Support groups such as MUI are important because there are many questions a young person may have surrounding their sexual identity. For example, why you choose a particular person or persons to come out to, when is the right time to express how you are feeling, where you decide to tell the person as it’s important to be in a safe environment and what resources are out there should you need to avail of them.

MUI is the first group of its kind in Carlow which means many teens will now have the fantastic opportunity to engage with other teens in fun, safe surroundings. Leanne Sweeney, youth worker and coordinator of the MUI group said,

‘We meet every second Thursday night from 7 till 9 in the Vault in Carlow town. We are now encouraging anyone who is LGBT and of secondary school age to join this fun and confidential group.

If anyone is interested in finding out more about the group, then please contact any of the youth workers in the Vault on 059 9133714 or you can phone or text Leanne on 0852722379. You can also follow the group on Facebook at Mui Carlow.

Follow
This entry was posted in Carlow, MUI_crlw, Youth. Bookmark the permalink.