Ms Gay Ireland is a national competition celebrating LGBT women from all over Ireland. The winner of each qualifying heat represents their area in the national final. 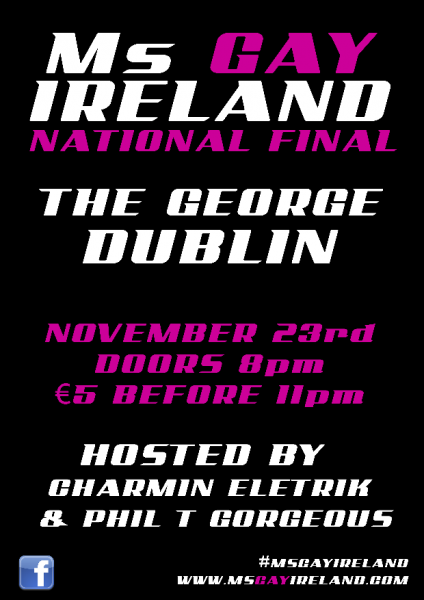 The first Ms Gay Ireland took place in The Forum, Waterford City in September 2010 with Tasha Clyde claiming victory and the chance to bring the competition to her hometown.

Ms Gay Ireland 2011 was held in Dolan’s Warehouse, Limerick on Friday 9th September as part of Limerick Pride and was won by Ms Gay Dublin Emma Parkes. Her chosen charity was BeLonG To. As a result, the national final will take place in The George, Dublin on November 23rd 2012!

Ms Gay Ireland 2012 will take place in The George, Dublin on November 23rd!

Charmin Eletrik will be joined as Phil T Gorgerous as hosts of the event in Dublin, interviewing the finalists so the panel of judges can choose a winner.

All proceeds from the event will be split between the LGBT Diversity National Trust Fund and the winner’s chosen charity.

Admission is €5 before 11pm. Doors open at 8pm with the show at 9pm. Be sure to arrive early.

The judges for the final are