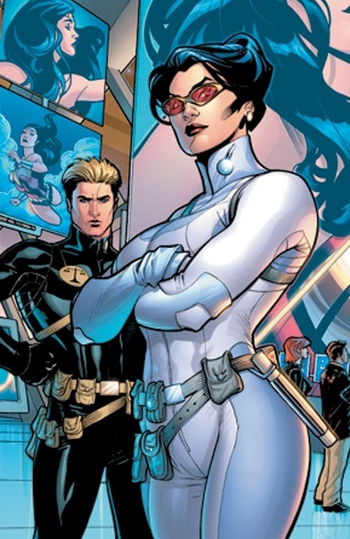 Orientation: Bisexual
Age: 69 years
Hair colour: Black
Eye colour: Blue
Height: 6′ 0″
Weight: 140 lbs (64 kg)
Describe yourself:
Wonder Woman is an Amazon (based on the Amazons of Greek mythology) and was created by Marston (an American) as a “distinctly feminist role model whose mission was to bring the Amazon ideals of love, eace, and sexual equality to a world torn by the hatred of men.'”
Special abilities: (talents)
Diana is destined to become “beautiful as Aphrodite, wise as Athena, stronger than Hercules, and swifter than Mercury.” Her powers include superhuman strength, flight, super-speed, super-stamina, and super-agility. She is highly proficient in hand-to-hand combat and in he art of tactical warfare. She also possesses an animal-like cunning and a natural rapport with animals, which has in the past been presented as an actual ability to communicate with the animal kingdom. super breath (to blow jet streams or transform water into snow) which apparently came from Hercules; ventriloquism; imperviousness to extremes of heat and cold; ride the air currents as if flying; even sense air updrafts with her fingers mental telepathy (even to project images); microscopic vision; the ability to vibrate into another dimension. She uses her Lasso of Truth (which forces those bound by it to tell the truth), a pair of indestructible bracelets, and an invisible airplane.

Hobbies:
Flying, hand to hand combat. Trained with over 3000 yrs. of cultural knowledge, since infancy in the art of combat, Diana is a master of ancient & modern forms of armed & unarmed combat. She is also a master of the Amazon martial arts that are only practiced by the Amazons. Knowledge of a dozen languages (including those of alien origin), multiple complex crafts, sciences and philosophies, as well as her Amazon legacy of over 3000 years of leadership, military strategy, and armed and unarmed combat. More recently Athena bound her own eyesight to Diana’s, granting her increased empathy. Artemis goddess of the hunt, animals, and the Moon, graced Diana with the Eyes of the Hunter and Unity with Beasts. The Eyes of the Hunter ability gives Diana a full range of enhanced senses, such as enhanced sight and hearing. Unity with Beasts grants her the ability to communicate with all forms of animal life, as well as to calm even the most ferocious of beasts. 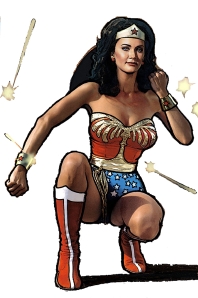 Give three words that describe you.
Fabulous, sensuous, wonderful.

Why are you the role model for the model county?
Through the popularity of her Wonder Woman alter ego, the personality, concept, and name of Diana Prince have become ingrained in popular culture as well, becoming synonymous with secret identities and innocuous fronts for ulterior motives and activities. Diana was actually the most competent person to tackle a crisis, whether by exercising her knowledge or her power as Wonder Woman, riding in with an all-girl cavalry of Etta Candy and the Beeta Lambda sorority. In fact, for a period of time in the 1960s, Wonder Woman lost her powers and functioned exclusively as a non-powered Diana Prince who nonetheless experienced high adventure as a Modesty Blaise-type character.

Follow
This entry was posted in mma wexford, sample. Bookmark the permalink.