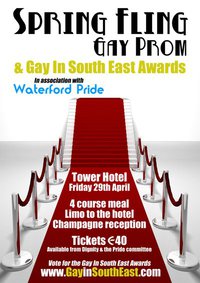 We ask that your group ranks each nominee from best to worst in each catagory like so:

All 5 regions and the public vote will be added together to get the overall winner.

Thanks everyone and below see a list of the nominees and a quick sentence about each!

Charmin Eletrik
Charmin is the host of Wednesday and Sunday nights in Dignity and runs the Saturday Pop Eletrik Show. She was the Friday night DJ in Dignity Kilkenny.

Cher Guevara
Cher is the host of Thursday nights and part of the Pop Eletrik show. Originally from Clonmel and winner of Dragiators Season 1.

Leanne Murphy
Leanne won Dignity?s X-Factor Season 1 was a judge for season 2. She is a regular part of Roxxi?s Live Lounge and the Pop Eletrik show..

Victoria De Tampax
The queen of Wexford hosted Mr & Ms Gay Wexford and Out For The Weekend and made it to the final of Dragiators Season 2. She is currently competing in season 3.

Gay Weekend Tramore
The first Gay Weekend was held last year in the Grand Hotel with lots of entertainment. A Christmas event was held in December.

Waterford Pride
The LGBT Pride festival for the South East grew vastly in 2011 with about 1200 people taking part in the parade alone.

Caf  Loco
The Youth Caf  is a regular hang out for Waterford?s LGBT Youth and provides a safe and relaxing environment for our young people.

Geoffs Bar
Long hailed as a gay friendly alternative to Dignity, Geoffs is a regular meeting place for a coffee or quiet drinks for Waterford?s LGBT community.

Revolution/Escape
Owned by a gay man, Escape Niteclub was a regular post-Dignity hang out for the LGBT community on Wednesday and Thursday nights.

Sunrise Coffee & Books
SunRise is known as a great place to catch a coffee and relax for the LGBT community in the Newbridge area. So much so that they named their LGBT group after it.

Absolut Vodka
On a national level, Absolut support a number of LGBT events. In the South East, they have been supporters of Dignity?s X-Factor and Got Talent competition, Ms Gay Ireland and Pride.

BelongTo
A national organisation focused on bettering the lives of LGBT Youth. Currently involved with young people in Waterford, Wexford and Kilkenny.

David Norris
A senator and advocate of gay rights long before legalisation. David Norris is currently favourite to become our next president.

Cllr Mary Roche
Mary Roche is the current mayor of Waterford and has supported the LGBT community and Pride in her time as councillor.

TranSE
A support group for the transgendered community in the South East, TranSE organised the first TransAction Awareness day and are actively involved in promoting LGBT rights.

The Anchorage
The Anchorage is a gay-owned B&B in Waterford and become a favourite place to stay for LGBT visitors to the city.

Dignity Bar
Dignity is owned by Sean and Ger and is the only gay venue in the South East, although until last summer, they also were the owners of Dignity in Kilkenny.

Mycrofilms
Mycrofilms is a video & film production company in Kilkenny who specialise in content for online distribution and broadcast as well as crew and equipment hire.

Chill Out
The Youth Group in Waterford helps LGBT young people in the South East from ages 14 ? 23 and provides support and advice.

LGBT Diversity
A national organisation but with a regional office for the South East promoting all aspects of LGBT life in the community.

LGBT South Tipperary
Working with the community in South Tipperary, the group has been increasingly active in the last year with events and increased visability.

sOUTh
The LGBT group in Waterford has just gone through a major change and continues to support the LGBT community in every aspect.

WIT LGBT
This past year has seen WIT LGBT grow like never before with more visability and a vastly increasing membership.

Alan Slattery
Alan is part owner of Mycrofilms and creator of the Out For The Weekend festival. He strives to better the lives of LGBT people in Kilkenny.

Gerard Reddin
Gerard is the reigning Mr Gay Tipperary and is actively involved in helping the LGBT community through his involvement with LGBT South Tipperary.

Ronan Brady
Ronan Brady is this years chairperson of WIT and LGBT and through his leadership, the group has seen massive growth.

Vanessa Lacey
Chairperson of Teni, TranSE and now sOUTh, Vanessa is well known all over the country as an advocate of Transgendered rights as well as all aspects of LGBT life in the South East.

Charmin Eletrik
Charmin has been DJing since the days of Ultimate and can currently be heard on Wednesdays and Sundays in Dignity. She was also the Friday night DJ in Dignity Kilkenny.

John Morton/Ken Maguire
Out For The Weekend saw the duo of Ken Maguire and John Morton get Kilkenny up on their feet and dancing.

DJ Shaz
Currently resident DJ in Dignity on Wednesday and Thursday, Shaz was also a regular DJ in Dignity Galway as well as Bubble in the Forum.

Stephen Duggan
Stephen has been a regular part of the Dignity line up since the beginning and has been a weekly regular in both Waterford and Kilkenny.

Chill Out Senior Group
Chill out senior group are the over 18s from Chill Out who meet to discuss issues, lend support and just hang out.

Dining Out Kilkenny
Dining Out was set up so as the LGBT people in Kilkenny could meet for a meal and get to know each other better in friendly surroundings.

Gay Wexford
Gay Wexford plays a role in the support of LGBT people in Wexford but is also instrumental in organising social events including Mr & Ms Gay Wexford.

Sunrise LGBT
Only recently formed, Sunrise LGBT are Kildares LGBT group and have organised events and get togethers for the community.

Wanna Bees Glee Club
The Wanna Bees are a performing social group whomeet every Monday to rehearse and hang out. They are now a regular part of the Saturday Pop Eletrik show in Dignity.

Denise McCarthy
Denise the WIT Welfare officer and has been a large part of the success that WIT LGBT has experienced in the past year.

Ger Taylor
Ger is part owner of the Dignity group with Waterford being the only current gay venue in the area. The bar in Kilkenny closed last summer.

Jonathan Rolle
Chuckie is well known to the locals in Dignity as manager of the bar. He?s a friend to many and always willing to fight the LGBT corner.

Ross Costigan
Ross has been involved with LGBT life in Kilkenny through work with Mycrofilms and also as part of Out For The Weekend. He has photographed many gay events in the region.

Tara Moriarty
Tara has been actively involved with LGBT South Tipperary and was instrumental in the creation of the group in the north of the county too.

Cris Pender
Cris Pender is a leading voice behind Sunrise LGBT in Kildare and is pushing for greater visability for the LGBT community in the county.

Deirdre Ni Dhubhghaill
As the chair of Gay Wexford, Deirdre has seen the group grow and prosper. She is also a great supporter of other LGBT groups in the region.

Kaz Corcoran/Angela Barrett
Kaz and Angela were both involved in getting Out For The Weekend off the ground and are to be commended for a large part of its success.

Tracy Morrissey
Tracy is currently a member of both the Waterford Pride and sOUTh committee and has increasingly become a voice for the LGBT community in Waterford.

Vanessa Lacey
Chairperson of Teni, TranSE and now sOUTh, Vanessa is well known all over the country as an advocate of Transgendered rights as well as all aspects of LGBT life in the South East…

We ask that your group ranks each nominee from best to worst in each catagory like so:

All 5 regions and the public vote will be added together to get the overall winner.

I hope this is okay for everyone and we ask you get it to us no later than Wednesday.

Nobody will know who wins until they’re announced on the night, except for Leann!