“United States of Tara” Desperate Housewives meet ME MYSELF AND I 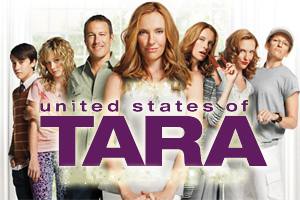 Tara is depicted neither as a freak nor as a victim but as a valuable, lovable woman who happens to be burdened with more than her fair share of mood swings.

Her alters (other personalities) comprise of:
T, a rowdy, sex-crazed teenage girl,
Buck, a beer-swilling, gun-loving redneck male war venture ,
Alice, a cake-baking, ’50s-style homemaker to the tenth power,
And a few more. 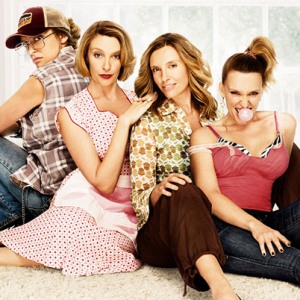 Tara is a career artist who decides to stopped taking medication that suppressed her other identities because the drugs were affecting her artistic (and sex drive). By letting her alters free, she believes she may also finally get to the root of her trauma that caused her personality to split.

Her family is made up of  husband, Max (John Corbett) who tries his best to be a loving partner , two children, 15-year-old Kate (Brie Larson) and 14-year-old Marshall (Keir Gilchrist), stand out instantly: funny and touching in very different ways. Both are urbane, smart-mouthed and kind hearted.

Kate is pretty, slightly but not completely rebellious, and interested in clothes, boys and having fun. She accepts her mother’s condition, except when she resents it. “Why can’t she just be manic-depressive like all the other moms?” she laments. Marshall is more of a loner. He is well read,  bakes cupcakes (“It’s Paula Deen’s recipe, tweaked slightly”) and is gay, and not afraid of letting his family know it. 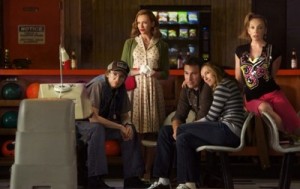 Ms. Cody begins Tara’s story where most multiple-personality movies end: after a diagnosis has been made, and the patient has resumed a somewhat normal life. This is a dissociative identity disorder story for the post-Freudian era: Tara’s therapist is rarely seen, and seemingly not much of a factor in her life. She has a far more intense relationship with her insecure sister, Charmaine (Rosemarie DeWitt), who cannot accept her sister’s condition and at times seems to think it’s more of an act.

If Tara’s family can readily accept and at times even have fun with the “alters,” so should viewers.

Ms. Collette’s depiction of T is particularly hard to watch because Ms. Larson plays a real teenager so well and naturally: T and her gum-chewing, thong-thwacking tics look out of place.

Alice is not much more convincing; Ms. Collette plays her as a parody of Bree, the obsessive homemaker in “Desperate Housewives.” Oddly enough, Ms. Collette is most affecting as Buck, a blustering redneck who has a hidden soft side.