Pride, the topic for this month

Seeing as it is the pride season I thought that Pride should be the topic for this month. Many people see pride as a fun day out with drinks flowing while some see it as totally unnessacary, that it is a day/week we further segregrate ourselves from society and the true meaning of pride gets lost along the way. 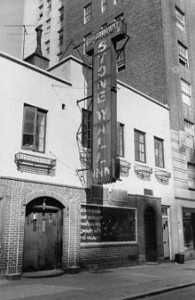 The truth is Pride is held during the Summer months to commemerate a very special day 42 years ago where in a little bar in New York history was made, this bar was Stonewall. Stonewall was known to be a gay bar to the NYPD and back in 1969 when these events took place the idea of a gay bar was unheard of. The NYPD raided the bar as they did every few weeks arresting the ‘obviously’ gay men and women, those who were lucky enough to would not be identifiedbut not this night!

This night they didnt run instead to the great surprise of the NYPD a crowd gathered waiting to erupt and finally stand up for themselves and all they needed was a spark which they dually got. A woman was being dragged from the bar and with a simple cry for help the crowd erupted, it started of with less than one hundred people but the crowd grew and grew until they overwhelmed the NYPD. Three days of rioting took place the rioters message was simply equality for all.

One thing to note about this faithful night was that for the people fighting this bar was all they had, many of the people who went here were living in poverty, they were literally putting everything they had on the line for their rights. This is seen as the beginning of the gay rights movement around the world this one bar changed everything people were tired of being second class citizens afraid to be the person they were born to be, they finally stood tall and started fighting united as a community.

The meaning of pride is still the same behind all the partying and the drinking it is a day when we are heard and the eyes of the country are on us as a community. So if you are going to pride this year remember Stonewall stand tall and have pride in who you are.

This post was written by a guest contributor. The views and opinions expressed in this article are those of the authors and do not necessarily reflect the official policy or position of this publication. Please see their details at the end of the post above. Gaze Guest Author gives you the opportunity to share your stories. How? Send them to life@gayse,net, editor@gayse,net or via our contact page
View all posts by Gaze Guests →
This entry was posted in Coming Out, GYW, History, Wexford and tagged 1969, cross dressers, fighting united as a community, gay, gay bar, gay rights movement, living in poverty, meaning of pride, men, NYPD, Stonewall Inn, women. Bookmark the permalink.

One Response to Pride, the topic for this month