The Ms, Mr & Alternative Miss Kildare was held in the Derby House Hotel, Kildare on the 28th of May. Receiving a great deal of positive media coverage before and since.

What is the effect of your win? Has it been life changing in any way?

Ans :- Well it certainly has effected my life I have found a whole new respect for my family, friends and work colleagues. It was an eye opener to realise how much people loved and respected me for being me and for not only entering but winning Ms Gay Kildare. We don’t have a social outlet in Co. Kildare except for Sunrise coffee shop in Newbridge and we have to travel to Dublin, Waterford, Galway etc.. 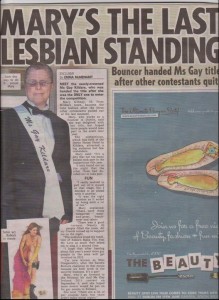 Tell us a little about yourself?

Ans:- I am a native of Kildare town and still currently reside here (until I win the Lotto ).. I am a dying breed of butch lesbian, you wont find too many of my type around these days. I like my waistcoats and suits, I think its a shame, that people still feel they can’t be who they want to be or dress the way they want. I still go out with my head high and am proud of who I am.

I work in the security industry. My work includes concerts, festivals, banks, hotels, static and of course I am a door person too. I’m hoping to complete my bodyguard course later this year.

When I have time off I love to spend time with family and friends. Going hill walking, movies, catching up on the latest James Patterson book, or almost any book I can get my hands on. I like all types of music, I don’t follow any one genre, there is too much out there to like. I love sports although I have long retired from taking part myself..

You’ve won your local heat of Ms Gay Ireland, where do you go from here?

Ans:- The next step is the finals in Limerick on the 9th of Sept. I am really looking forward to that and meeting the other contestants should be a bit of craic. After the competition, it will be back to work and to Sunrise promoting LGBT in Kildare. We need to make a start on next year’s Gay Kildare, and we hope to have a lot more contestants flying the flag in our part of the rainbow.

How did you feel preparing for the ‘Gay Kildare’? The build up?> on the day?> on the stage?> winning?

Ans:- Wow, where to start? Well the preparation was fun to say the least. There were 2 rounds that needed the most attention and like the other contestants I knew I had to give it my best. I chose my outfit for beachwear easy enough- I wanted to have a giggle with that one!

For me, the hardest round was going to be the talent. I am no Adele but I decided to murder one of her songs. Once I decided what I was wearing and what I was singing, the rest was up to the night itself. 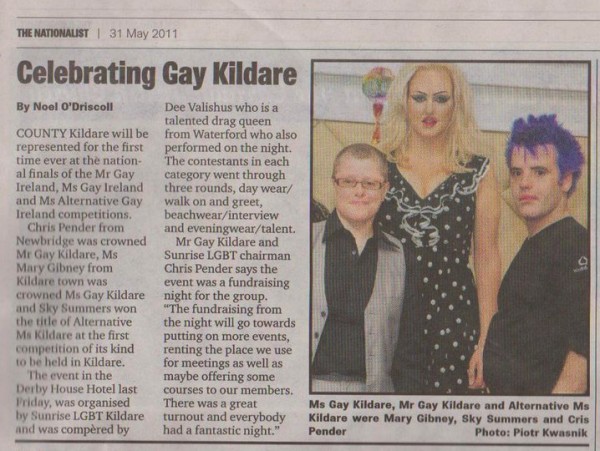 The Nationalist covered the first ever Gay Kildare event.

To be honest, the build up to the night and having to help organise the night was more nerve wrecking. I was beginning to panic, as I only received my backing track the night before. As I was up to my eyes trying to get the final running order printed, I had no time to rehearse my song at all. Before I knew it, it was daylight and I had to get my stuff together as I was unsure what time I was going to get home. After collecting Chris Wilson, we arrived at the venue and began getting it ready for the night ahead.

Eventually, we finished up and I still had to drop Chris home and then get back to the venue, to collect Cris Pender and drop him to get his stuff and drop him back to the hotel, before eventually getting home myself, leaving me just 1 hour before being due back at the venue. I had just enough time for a shower and to grab my clothes and get back. On returning, I discovered that two of the other contestants for the Ms section and one from the Mr section had pulled out. So I asked Cris to check on the third contestant for the Ms section so as you can tell, there was no time for nerves.. Unfortunately the third contestant had also withdrawn.

The realisation kicked in, that I was going to be on my own. I thought about withdrawing, but after chatting with one of my good friends, I took her advice to get out there and enjoy it. I gave it 100% as if all the other contestants were still there. As the talent section drew nearer, that is when the nerves kicked in. As I said before, I did not have time to rehearse, but I stepped out on stage and took the microphone. I looked out into the crowd, there was only one face I wanted to see, but unfortunately, it was not there among the sea of faces. However, I sang as if it was. When I finished singing, the crowd gave me a standing ovation. As I left the stage, I was overwhelmed at that response. When I got back stage, the other contestants were clapping and hugging me.

The next part was easy for me as I didn’t have the same wait for the results that the other contestants had. The response from the audience and the comments from the judges were really positive. But when Dee Valishus asked me to sing again it was the most amazing feeling in the world!

I think the only thing that could top that now is winning Ms Gay Ireland or to get married. 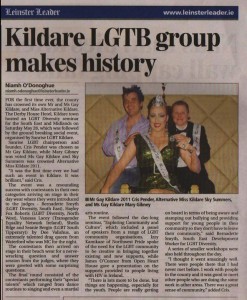 I have to say seeing my picture in the paper was surreal. While I was apprehensive about doing the article at first, I am glad I did it, because not only has it made people aware that LGBT is in Kildare, but that they are not alone, that there is support out there for them, in the community. And hopefully, next year, will bring more people into our competition and also to our little part of the rainbow.

Ans:- I guess what I believe in is – everyone is unique, live everyday like it’s your last. Take chances and don’t live with regrets. Those who truly love you, will forgive and support you, no matter what and those who can’t, or wont, don’t count! You have only one shot at this life, so grab the bull by the horns and live, love, laugh with no regrets- make it count!!

It is and honour and privilege to not only win Ms Gay Kildare but to be apart of history because of it, and will hopefully encourage more people to be themselves.

MaryB has been around, loved a lot & lived a little. Thoughts, frights & flights of fancy. MaryB has been there and back again. Yep! there's a little MaryB in someone near you. *** There is a little Mary B Goode in everyone. *** Share your story editor@gayse.net
View all posts by MaryB →
This entry was posted in Kildare, LGB&, mma kildare, Ms Gay Ireland and tagged Co. Kildare, encourage businesses, gay friendly, Kildare town, LGBT community, Mary Gibney, Mr & Alternative Miss Kildare, Ms, Ms Gay Ireland, Ms Gay Kildare, social outlet, Sunday World, Sunrise coffee shop. Bookmark the permalink.