In the latest Wonder Woman comic (released in digital format on Aug. 20), the feminist icon becomes the first DC hero to officiate a marriage between characters of the same gender.

After performing the ceremony, Wonder Woman schools Clark Kent on his provincial view of marriage. “I… didn’t know you’re a proponent of gay marriage?” Superman stammers. “Clark, my country is all women,” she retorts. “To us, it’s not ‘gay’ marriage, it’s just marriage.” 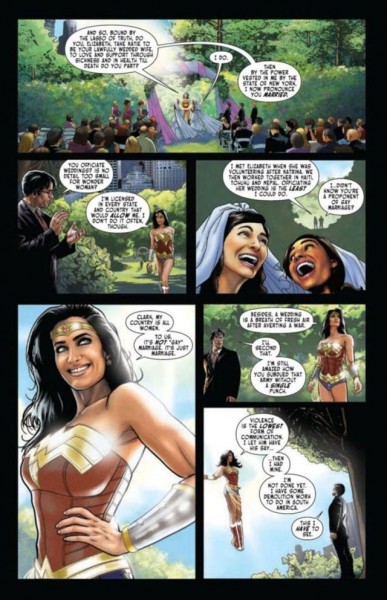 This scene marks an important moment in the world of DC comics. Just two years ago, in 2013, the writers of DC’s Batwoman—the brand’s first openly gay mainstream hero—resigned after DC refused to allow them to show Batwoman’s marriage to Gotham cop Maggie Sawyer.

So why the change of heart? “I was a little hesitant, but I had two things,” the comic’s Australian author and illustrator Jason Badower tells Quartz. “My story was pitched after the Supreme Court decision, and the other thing is that my story has Wonder Woman officiating rather than getting married.”

Like Catholic priests, heroes are generally prevented from getting married by their duties. The proverbial ball and chain, Badower explains, is “a death sentence” for a hero’s plot line. For example, if Clark Kent marries Lois Lane (which he did, in 1996), he can’t date or be romantically involved with Wonder Woman. (“It’s not like superheroes to get a divorce,” Badower noted.)

Instead, comic writers have to wait for a “re-boot” of the brand’s universe, something DC does on average every eight years, or create an alternate universe in which the hero is unmarried and is thus free to engage in romantic dalliances. Romance and mystery are central to the hero genre, so taking away the potential for heroes to explore new love affairs leaves writers’ hands tied.

A commitment to storytelling doesn’t mean there can’t be—or shouldn’t be—some socio-political overlap in comics. In the case of the Batwoman plot line, DC’s choice to bar the marriage was not based on an ideological position, according to Badower. Rather, it was a business decision that led to some bad PR.

“The people at DC are some of the most open minded, creative, educated people I have ever met,” he said. “The trick is you are dealing with characters that are global icons with an audience. It’s not about what DC wants to do, it’s about what the audience will respond to.”

But a commitment to storytelling doesn’t mean there can’t be—or shouldn’t be—some socio-political overlap. In fact, the very best comics have long found ways to weave current events and issues into their story lines. After all, Wonder Woman creator William Marston described the character as “psychological propaganda for the new type of woman who should, I believe, rule the world.” And X-Men creator Stan Lee once said, “The whole underlying principle of the X-Men was to try to be an anti-bigotry story.”

Badower’s latest comic aims to hit the same comic book sweet spot as these examples, making a political statement while staying true to Wonder Woman’s storyline and character. (Wonder Woman is a princess of the Amazons, and, as such, is tasked with performing marriages between members of the all-female tribe, Badower explained.)

“My audience is intelligent people looking for examples of how to behave in this new society. And because it’s in her character, I got a great response,” he said.

Sensation Comics Featuring Wonder Woman (Issue #48) will be available in print in Nov. 2015.