A few weeks before the 17th of March, I’d received a phone call asking would I mind having my name put forward to meet our President Mary McAleese at the Áras an Uachtaráin. I remember making incoherant sounds before the words akin to, I would love to go to the Aras for St Patricks day came out. Over the weeks that followed I waited for the morning post in anticipation. The morning of Tuesday the second of March I was sure the invitation would be on the mat when I went down. Gold embossed harp facing the ceiling,  I enjoyed the moment for a few days before I extended an invitation to my guest.

St Patrick Day being a rather busy day nationwide, departure from Wexford was a strategic endeavor. Top up the Fuel, wash the car, find an alternative parking location, away from Wexford’s Parade Route. Listen to the Wexford St Patricks Parade. Eamonn arrived shortly after twelve and we set off for Dublin to arrive at An Aras for 3.30pm

Eamonn in front of Aras an Uactharain

The trip to Dublin was uneventful, a clean run, with a slight detour from the planned route, we arrived at the Pheonix park early. As requested we approached the gate:

(a) no later than the time specified on the invitation.
(b) no earlier than 10 minutes before.

Parking was available in the grounds of Áras an Uachtaráin. 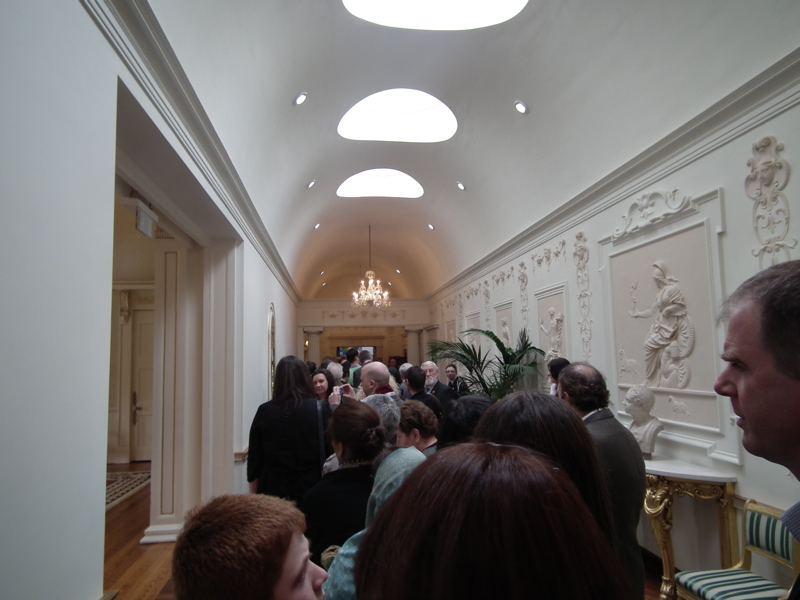 At our appointed time we were guided into the waiting hall. we spotted a familiar face ahead of us. Ian from ‘Gay Bray’ & pondered on where Vanessa might be, already within? 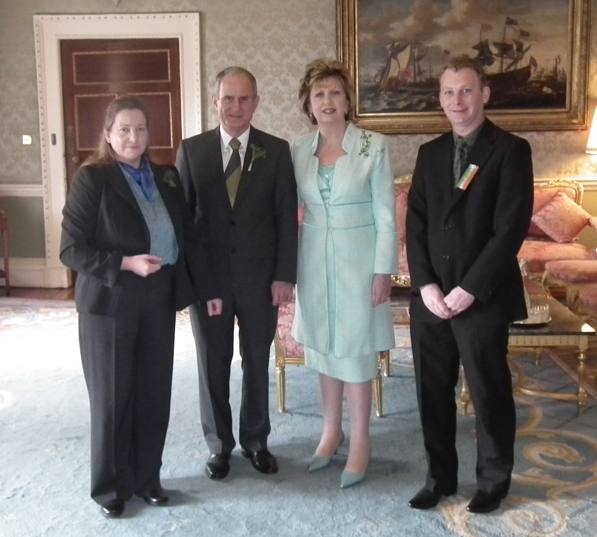 At the greeting room door while being announced all memory of my pre composed greetings disappeared. We were in the company of Mary McAleesse. We conducted our selves correctly and smiled a lot and some more on top of that. Then posed, there was some giggling over having to give instructions on how to use the camera & we posed again. More hand shaking, smiling then we were directed to the reception room. As the blood returned to my head I realised Eamonn was speaking. We spotted Ian, later Vanessa with her son a ‘head’ above the delegates (well! not her son, so much, until we moved down to that room, he’s somewhat shorter than I, being a young boy) 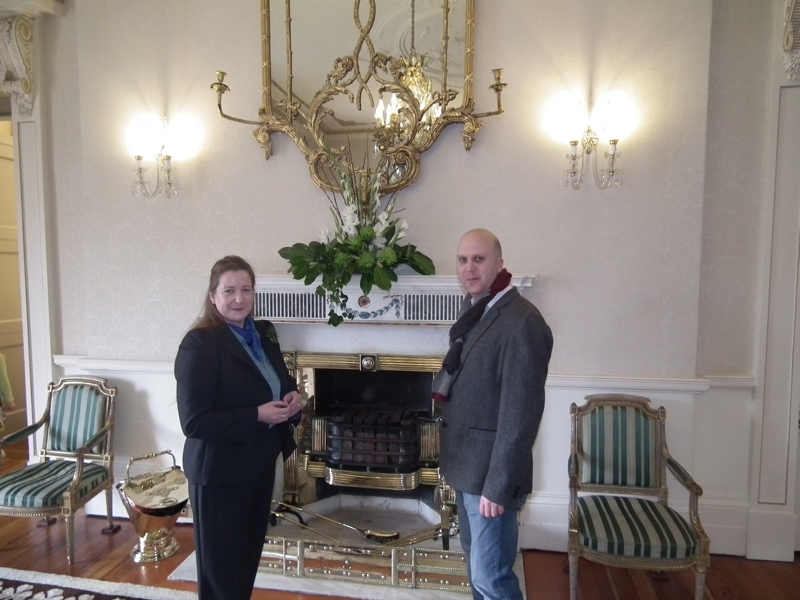 It’s that fire place we were practically compelled to pose. 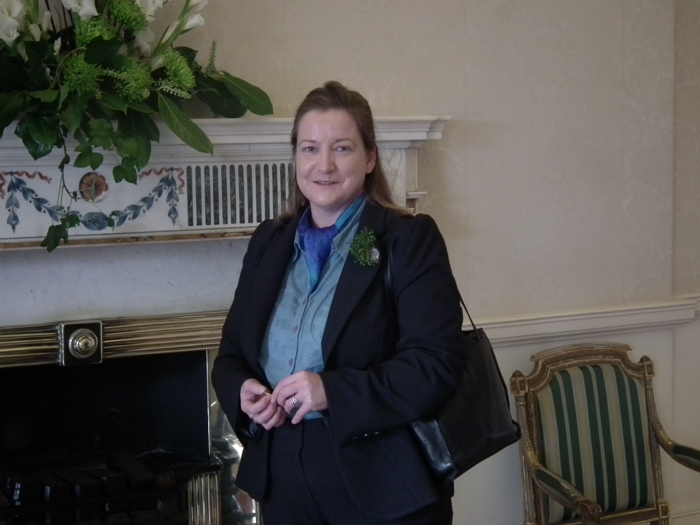 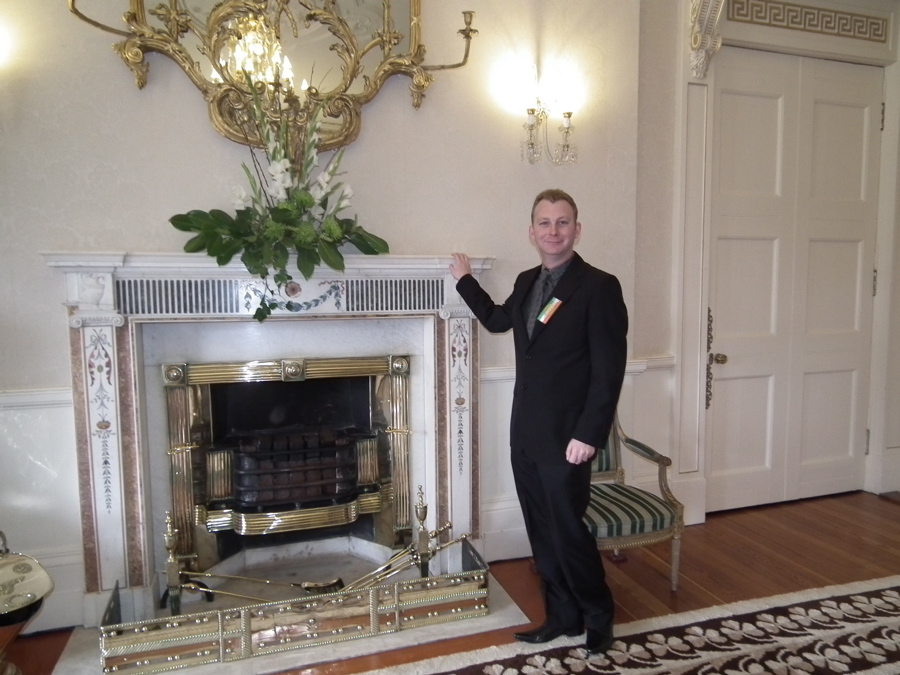 Eamonn at that famous fireplace

Fortified from a buffet ranging from bite sized collcannon, cocktail sausages, hors d’œuvre to geometicly shaped, small sandwiches we attended President Mary McAleese’ address in the Hyde Room. Mary was followed by a recital by Pól O’Muiri, the Master of Ceremonies, of some of his poetry before he introduced the Kilfenora Ceili Band & later the Crosserlough Set Dancers from County Cavan. Each gave a performance of two pieces. 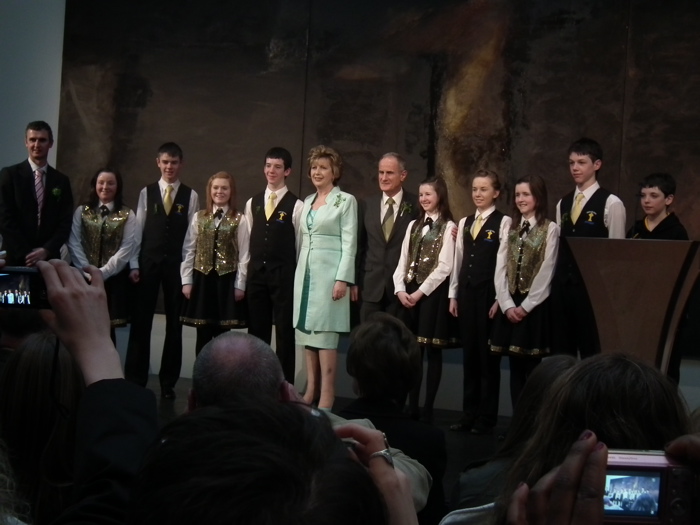 After the photo shoot all the delegates were given the opportunity to explore the grounds and the public areas of ‘Aras an Uachtarain’. It’s a beautiful example of an Irish interpretation of the architectural styles of the early 2oth Century.

A brief glimpse of ‘Gay Wexford’ meeting of President Mary McAleese & Dr Martin McAleese  in the Áras an Uachtaráin on the 17th of March (St Patricks Day) 2011. It was fabulous. 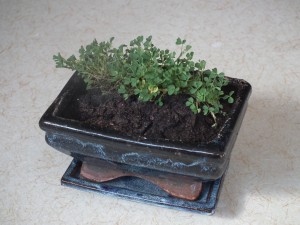 This post was written by a guest contributor. The views and opinions expressed in this article are those of the authors and do not necessarily reflect the official policy or position of this publication. Please see their details at the end of the post above. Gaze Guest Author gives you the opportunity to share your stories. How? Send them to life@gayse,net, editor@gayse,net or via our contact page
View all posts by Gaze Guests →
This entry was posted in LGB& and tagged 17th March 2011, Áras an Uachtaráin, Crosserlough Set Dancers, Deirdre ní Dhubhghaill, Dr Martin McAleese, Eamonn Byrne, Gay Bray, Gay Wexford, Ian, It was fabulous., Kilfenora Ceili Band, Master of Cermonies, Pól O'Muiri, President Mary McAleese, St Patricks Day 2011, TransSE, Vanessa Lacey. Bookmark the permalink.